Phoenix Contractors is committed to building and renovating in ways that use resources efficiently and help to sustain a clean, healthy environment. Here are just a few examples of our earth-friendly methods and approaches on recent projects:

Putting the Green in Greenhills School

Phoenix Contractors constructed a green addition to Greenhills School, a leading independent middle and upper secondary school in Ann Arbor. The addition aimed for “gold” certification – second only to “platinum” – in the Leadership in Energy and Environmental Design (LEED) Green Building Rating System. The addition has, for example, have a green roof to handle rainwater and aid in efficient capture and use of energy. 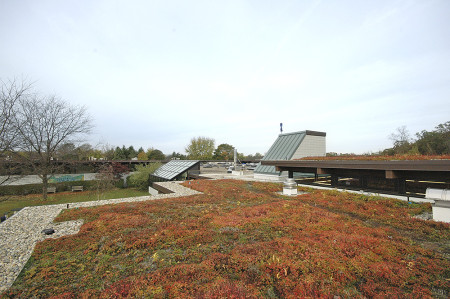 Being Green Before Green Was the Thing

In 1993, Phoenix Contractors renovated the Phoenix West building, a 26,000-square-foot home to numerous professional offices with custom interior build-outs two blocks west of Main Street in downtown Ann Arbor. Phoenix West is not only an exceptionally elegant building – distinguished, for example, by its coved ceilings and recessed lighting – it also conserves energy well. We recently submitted the building to a green survey and found that very few things related to energy usage have needed to be improved upon.

Walking the Green Talk Ourselves

Phoenix Contractors’ own headquarters building is a prime example of successful recycling. We acquired a building that had previously housed racquetball courts, and renovated it extensively, with a mind for efficient energy usage throughout. Skylights help to minimize the need for artificial lighting, compact fluorescent lights are used wherever possible, and motion sensors turn on the bathroom lights only when the bathrooms are occupied. We also added insulation and installed energy recovery units for the heating, ventilation, and air conditioning (HVAC) systems on the roof.